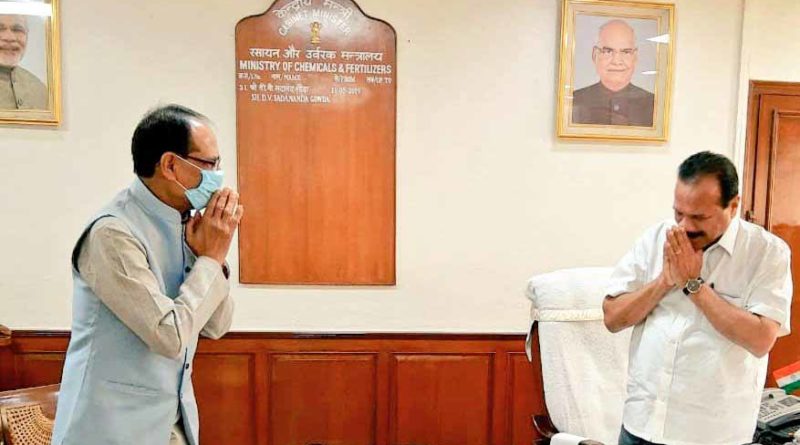 06 July 2020, New Delhi: Union Minister of Chemicals & Fertilizers Mr. D.V. Sadananda Gowda has said that there is no scarcity of fertilizers across the country during ongoing Kharif season. He added prepositioning in adequate quantities have been done in consultations with the State Governments.

Mr. Gowda assured the Chief Minister of Madhya Pradesh, Sri Shivraj Singh Chouhan who met Mr. Gowda, in New Delhi today about adequate availability of urea in his State as per the demand.

There has not been scarcity of urea in the state so far, the consumption of urea has increased due to higher rainfall in this monsoon and commensurate increase in sowing by 47 % as compared to corresponding period last year.

Sighting this Chief Minister Shivraj Singh Chauhan requested Central Government to make additional allocation of urea to the State and projected requirements during the months of July, August and September as there is higher demand of urea expected during this Kharif season by farmers.

Mr. Gowda assured that adequate supply of urea will be made available to Madhya Pradesh in coming days. Till June, the State has received nearly 55000 MT of additional urea, and 19000 MT has been allocated on July 3, 2020 in addition to July Supply Plan. Union Department of Fertilizers is continuously monitoring the situation, and is committed to make adequate supply of urea to meet the demand of farmers during ongoing Kharif season.

DBT sales of fertilizers have witnessed significant jump this Kharif season during the month of May and June across the country due to better than expected monsoon.

In Madhya Pradesh, DBT sales of urea has increased by 176 % and 167 % in the month of May and June respectively as compared to corresponding month last year. However, urea availability position in Madhya Pradesh is comfortable at present and there is a closing stock of 4.63 lakh MT  in the State as on July 4, 2020. Department of Fertilisers is reviewing the situation very closely, and any additional demand of fertilizers will be met, in consultation with Ministry of Agriculture & Farmers Welfare, through increased domestic production and imports.