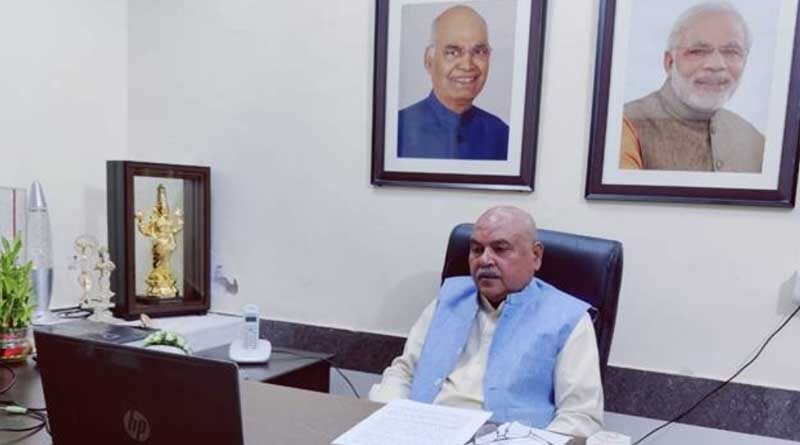 20 May 2021, New Delhi, IN: On the occasion of World Bee Day and in the auspicious context of the ‘Azadi ka Amrit Mahotsav’, Union Agriculture & Farmers Welfare Minister Mr. Narendra Singh Tomar launched the project of setting up of a honey testing laboratory at the Indian Agricultural Research Institute, Pusa, New Delhi. On this occasion, Mr. Tomar said that the Government of India, under the leadership of Prime Minister Mr. Narendra Modi, is fully dedicated to the village – poor – farmers. Taking a historic decision to increase subsidy, the Prime Minister has not let the burden of increased price of fertilizer fall on the farmers.

Inaugurating the project to establish a regional honey quality testing laboratory at the Indian Agricultural Research Institute (IARI) for quality testing of honey and other products of beekeeping under the National Beekeeping and Honey Mission  on Thursday, Union Minister Mr. Tomar said that when farmers used to get a bag of DAP for Rs. 1200, its actual price was Rs. 1700. The government used to pay the remaining Rs. 500. Due to sudden increase in the prices of phosphoric acid, ammonia, etc. at the international level, the price of DAP increased and staggered at Rs 2400. Had the government been providing a subsidy of just Rs. 500 per bag in such situation, it would have been available for the farmers for Rs. 1900 per bag. But, Prime Minister Mr. Modi instructed that our farmers should not be burdened by a single rupee. So, now the Centre has decided to maintain the price of DAP at Rs. 1200 by granting a support of Rs. 700 as a subsidy of more than 140 per cent. Mr. Tomar thanked the Prime Minister for this historic decision.

Mr. Tomar said that production of honey is increasing in the country and its export is also going up. Efforts are also being made for good quality of honey. Small and medium scale farmers should come forward to take up this work so that their income can be increased. This is why, Modiji’s government has increased the pace in this direction. Rs. 300 crore has been approved for the overall promotion of National Beekeeping & Honey Mission (NBHM), development of scientific beekeeping and achieving the target of “sweet revolution”. Besides, Rs 500 crore has been allocated to NBHM by the Centre under the Atmanirbhar Bharat Campaign. A world-class state of art Honey Testing Lab has been established at National Dairy Development Board (NDDB), Anand with the help of Rs 5 crore. Apart from this, two more regional / big testing laboratories have been sanctioned with an amount of Rs. 8 crore each for honey and other products of beekeeping. Aiming at the development of this sector, 13 mini / satellite district level laboratories for honey and other products of beekeeping and projects related to online registration and development of traceability sources of honey and other products and other important projects have also been approved. The Madhu Kranti portal for online registration and traceability system to track the source of honey and other bee products has also been launched two months ago.

The Union Minister said that steps have also been initiated for making of FPOs of beekeepers alongwith other efforts to promote scientific beekeeping. Total 10 thousand FPOs are being made across the country. The Prime Minister has emphasized on a self-reliant India. So, apart from an Infrastructure Fund worth 1 lakh crore rupees for the agricultural sector, the interests of beekeeping and other related areas have also been taken care of. Mr. Tomar said that the production of honey should increase and quality should not be compromised. Even the smallest farmers should be engaged in this work. The states should make all possible efforts so that this sector becomes a major source of employment for those who have no land.