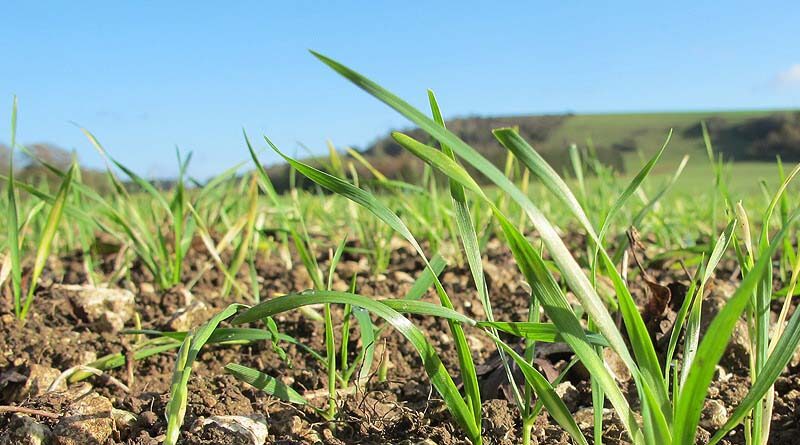 Nitrogen is ‘fixed’ from the atmosphere through a symbiotic relationship between legumes and rhizobia bacteria which form nodules on the legume roots. This is particularly important to support good legume growth and yield on infertile sandy soils, and to benefit following crops.

There must be an adequate number of rhizobia present in the soil for this process to be effective, with somewhere between 100 and 1000 rhizobia per gram of soil required for rapid nodulation. Even where suitable rhizobia have been introduced to the soil through previously legume crops, numbers of rhizobia can quickly fall below these levels, especially where sandy soils are acidic or have been aggressively cultivated.

Where the rhizobia numbers could be less than the threshold, it is recommended that the pulse seeds are inoculated with rhizobia at sowing. The more rhizobia that survive on the seed and in the soil until plant germination, the better the chances of good nodulation on the developing roots and high nitrogen fixation.

So, being able to reliably assess potential rhizobia populations in paddocks in summer or autumn helps to clarify whether the legume needs to be inoculated.

Until recently, growers and their advisors deciding on the need for inoculation have had little option other than reviewing the paddock’s cropping history and soil types, then erring on the side of caution.  Often inoculation is undertaken as an insurance strategy, despite the cost and inconvenience.

However, researchers at the Department of Primary Industries and Regions research division the South Australian Research and Development Institute have developed a PREDICTA® rNod test that measures the number of rhizobia in soil capable of nodulating field pea, faba bean, lentil and vetch.

The test was developed as part of a Grains Research and Development Corporation investment to improve benefits of nitrogen fixation in pulse crops in the southern region. The rhizobia test will allow for a rapid and accurate assessment of rhizobia levels in the paddock and the need to apply inoculant when planting legumes.

The test for Group E and F pulses (field pea, faba bean, lentil and vetch) was made commercially available in South Australia and Victoria in 2021, with national release planned for 2022.

Further tests for lupin and chickpea rhizobia are also in development and are currently being evaluated for reliability on a wide range of soil types across Australia’s cropping regions. A limited release of the tests for chickpea and lupin is planned for 2022.

An inoculation response trial carried out at Koolongong, Victoria in 2020 demonstrated both the effectiveness of the new DNA based test in predicting inoculation responses as well as highlighting those pulses that can do particularly well in sandy soils.

The PREDICTA® rNod test estimated 486 group E and F rhizobia per gram of soil, which indicates only a medium likelihood of an inoculation response at the trial site. Pending the development of DNA tests for group N and G rhizobia, a traditional plant bioassay, which is a laborious, slow and costly method used in research, predicted no background rhizobia capable of forming nodules with chickpea and lupin.

The nitrogen fixation data from the trial confirmed the results of the PREDICTA® rNod test with vetch and lentil showing only moderate (non-significant) responses to inoculation (Figure 1).

In contrast chickpea and lupin were most responsive to inoculation, fixing up to 50kg/ha more nitrogen than uninoculated treatments.

It is also worth noting that vetch and lupin fixed 36-68% more nitrogen per hectare than lentil and chickpea in the trial. This indicates the better suitability and growth habits of these crops at Kooloonong, where low fertility soil with poor water holding properties can be met by hot and dry weather conditions.

Even if a nodulated legume has been grown in the past, rhizobia numbers can decline rapidly under hostile soil conditions. For acid sensitive legumes such as lentil, vetch, field pea, faba bean and chickpea, their rhizobia don’t survive well below pH 5.5 (measured in calcium chloride).

Soil acidity should be monitored carefully by pH testing to depth (at least 30cm) and strategic tillage may be needed to improve the movement of the lime into the subsurface.

Compaction or high soil strength, a feature of many sandy soils, can also limit legume root growth and therefore nodulation. In addition, rhizobia for these crops also struggle on sandy soils which dry out quickly, especially if they have been cultivated.

In contrast, lupin crops and their rhizobia are more tolerant of acidic sandy soils.

Where inoculation is required, several practices can help improve nodulation success.  Increasing inoculation rate, sowing seed shortly after inoculation, sowing into moist soil, and avoiding or reducing contact between rhizobia and pesticide seed treatments will all contribute to improved rhizobial survival and nodulation.

Where legumes are sown into adverse soil conditions (e.g. acidic or insufficient moisture for seed germination), good rates of nodulation can often be achieved by increasing the amount of inoculant applied.  Under hostile conditions, doubling the recommended inoculant rates often improves nodulation.

Recommended inoculant rates vary for the different legumes, inoculant formulations and row spacings. Growers should seek advice from their supplier or agronomist to confirm the rhizobia concentration and appropriate application rate.

Unlike many crop inputs, there is no restriction on increasing the rate of inoculants, although very high rates of peat inoculant may cause seeder blockages.

Growers can be confident that rhizobia inoculants with the ‘Green Tick’ logo will deliver good levels of rhizobia and nodulation when correctly applied into suitable soils.

High quality granular inoculants are easy to use and can be just as effective as peat-based products (Figure 1). However, granular products can be more costly than peat inoculants.

Many growers are electing to use a granular inoculant in place of peat when sowing into dry soil, as this helps reduce the rate of rhizobia mortality if the break of season is delayed and the seed and inoculant sits in dry soil for many weeks. The rhizobia in granules are less vulnerable to desiccation than rhizobia applied on seed with peat-based products.

Some growers are also supplementing their peat-based inoculant with a low rate of granular inoculant to improve nodulation potential in paddocks with small zones of hostile soil, such as areas of sandy or acidic soil patches. The entire seed stock is treated with a peat-based inoculum before sowing as normal, and then granular inoculant is also applied to the pre-mapped, hostile soil types or zones using variable rate application technology.

These targeted applications of extra inoculant help reduce the overall cost of granular products at a paddock scale.

Apart from lupins, rhizobia associated with legume crops are sensitive to constraints common in sandy soils such as low soil mositure and acidity. These conditions can exist separately or together in sandy soils, as well as in patches within the one paddock.

Soil amelioration strategies such as deep ripping to address compaction and liming to neutralise acidification can be used to improve pulse performance on sandy soils.

Rhizobia inoculants will be required when planting legumes into sandy soils for the first time or where conditions are unsuitable for rhizobial survival.

New rhizobia DNA tests are taking the guesswork out of the requirement for inoculation.

Where inoculation is needed and adverse soil conditions occur, doubling the recommended rate of inoculation should be considered – especially when dry sowing into sandy soils.