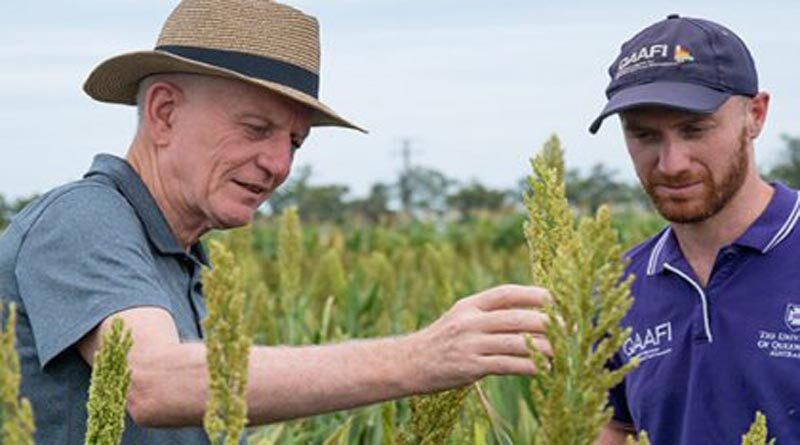 12 April 2022, Australia: A crop of half a million genetically diverse sorghum plants growing at The University of Queensland’s Gatton campus will help future-proof cereal production in a changing climate.

“This crop will help breeders more quickly find genetic traits of interest as essentially it is a ‘here’s what we prepared earlier’ library of traits,” Professor Henry said.

“Usually when mutagenesis is used, a gene of interest is found, a genetic variation induced, and the new trait is then bred over several generations.

“What this project is doing is generating and propagating half a million Australian-grown genetically diverse sorghum lines in advance and using high-throughput DNA screening tools to create a searchable library of genetic traits.”

The collaborative research effort is led by Denmark’s Carlsberg Research Laboratory, through the Semper Ardens ‘Crops for the future – Tackling the challenges of changing climates’ project.

“There is a great need for the world to have better and more climate-tolerant crops, particularly in areas with marginal agriculture,” Professor Skadhauge said.

“A significant knowledge of plant genetics is essential for the sustainable production of crops bred for traits like increased drought tolerance and improved disease resistance.”

Once harvested in early 2022, seed will be taken from each individual sorghum plant and split between researchers in Australia and Denmark.

The Danish team will extract DNA from the seeds, analyse it and create a database.

Professor Henry said the crop was around 500 times larger than previous studies, significantly increasing the possibility of finding desired variants.

“When this is up and running, breeders will be able to search the database for a desired trait,’ he said.

“For example, when we decide we want to find one of the DNA sequence variants that might be associated with disease resistance, we will contact Denmark.

“They’ll do the screening and tell us what packet of seed is likely to have the genetic variant of the gene we are looking for.

“We’ll then grow that and see if it provides the disease resistance we were hoping for.”

He said the work was concentrated on sorghum but one day the idea could be used in other cereals.

“Sorghum is the starting point because it’s a crop that grows in warmer and drier environments that other cereals,” Professor Henry said.

“Sorghum can be used in animal feed, human food, in brewing, and in biofuel.

“An easily accessible library of genetic variation in such a flexible crop will help facilitate innovative uses of sorghum.”